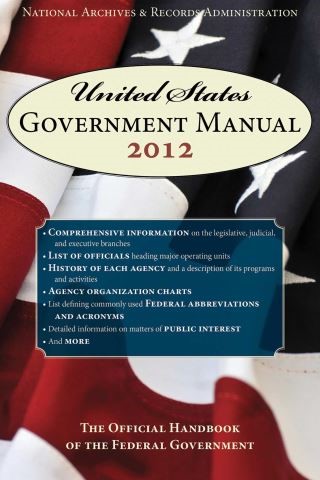 The Official Handbook of the Federal Government

The United States Government Manual 2011-2012 provides up-to-date information about the activities of federal agencies, as well as the names of top officials in the Obama administration and U.S. senators and U.S. representatives. You’ll find information on the legislative, judicial, and executive branches, a list federal acronyms, and more. This special edition includes the contact information for each agency for employment, government contracts, publications, films, and other public services.

Records Administration: The United States National Archives and Records Administration (NARA) is an independent agency of the United States government charged with preserving and documenting government and historical records and with increasing public access to those documents. NARA is officially responsible for maintaining and publishing the legally authentic and authoritative copies of acts of Congress, residential proclamations and executive orders, and federal regulations. Established in 1934, NARA was incorporated into the General Services Administration in 1949, but in 1985 it was made an independent agency.