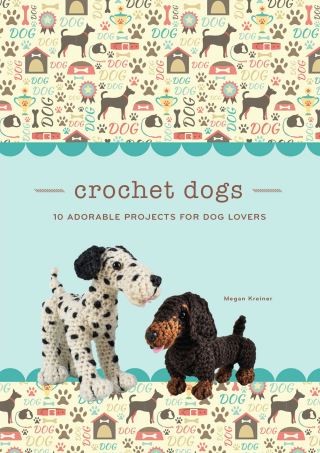 You’ll have a tail-wagging good time making these crochet canines!

Crochet a pack of pups in ten different breeds, including a dalmatian, standard poodle, husky, corgi, chihuahua, Boston terrier, pug, dachshund, schnauzer, and a Labrador puppy! This 80-page instruction book contains photos and illustrations to guide you in making all ten projects.

Megan Kreiner: Megan Kreiner grew up on Long Island, New York, in a home where art and art projects were a daily part of life. Coming from a long line of knitters and crocheters, Megan learned the craft at an early age from her grandmother, her aunt, and her mother. As of 2012, her MK Crochet pattern line has been published and featured in books and various crochet and knitting magazines. Inspired by her early love of Disney movies, Megan also pursued a career in the feature animation industry in Los Angeles, California, and currently works as an animator. Megan lives in Altadena, California.Meryl Henderson is a graduate of Syracuse University. In 1974, she graduated summa cum laude with a Bachelor of Fine Arts degree. For the past 44 years, she has been working as a freelance illustrator, specializing in artwork for children. She has illustrated more than a hundred books and has contributed illustrations to countless magazines and educational books. She currently lives in Catskill, New York.Chellie Carroll is a designer-turned-illustrator based in Derbyshire, England. She experiments with mixed media and, increasingly, rediscovering pens, pencils, and paint. Drawing on her experience in the fashion industry, she creates intricate patterns and striking compositions.