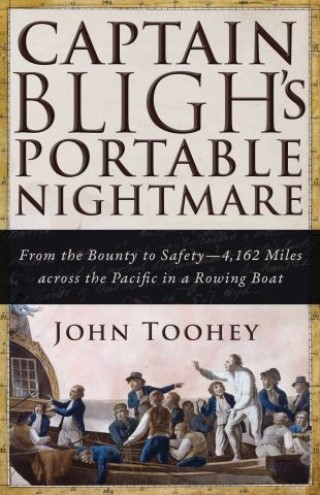 From the Bounty to Safety—4,162 Miles across the Pacific in a Rowing Boat

At dawn on April 28, 1789, Captain William Bligh and eighteen men from HMS Bounty were herded onto a twenty-three-foot launch and abandoned in the middle of the Pacific Ocean. Thus began their extraordinary journey to Java. Covering 4,162 miles, the small boat was battered by continuous storms, and the men on board suffered crippling illness, near starvation, and attacks by islanders. The journey was one of the greatest achievements in the history of European seafaring and a personal triumph for a man who has been misjudged by history.
Captain Bligh's Portable Nightmare reveals Bligh's great mapmaking skills, used to particular effect while he was exploring with Captain Cook. We discover his guilt over Cook's death at Kealakekua Bay. We learn of the failure of the Bounty expedition and the myths that surround the mutiny led by Lieutenant Fletcher Christian, the trials and retributions that followed Bligh's return to England, his successes as a navigator and as a vice admiral fighting next to Nelson at the Battle of Copenhagen.
Combining extensive research with dazzling storytelling, John Toohey tells a gripping tale of seafaring, exploration, and mutiny on the high seas, while also dismissing the black legend of the cruel and foulmouthed Captain William Bligh and reinstating him not just as a man of his times but as a true hero.

John Toohey: John Toohey is a photographer, historian, and journalist. He was born in Australia and now lives in Montreal, Canada.