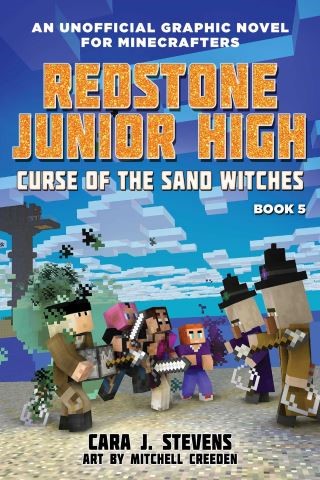 Curse of the Sand Witches

When word gets out that Redstone Junior High is a hot spot for hostile mobs, enrollment goes up and chaos is the new normal. To get away from all the stress, Pixel, Sky, Uma, and Violet find themselves sneaking off through a secret mine tunnel to a beach-filled paradise they discovered. Little do they know that they are trespassing on the territory of two very angry witches: Grindel and Agatha. The witches watch them from the shadows and vow to reclaim their beach by any means necessary. What starts out as mischievous tricks and upside-down spells escalates to a vengeful plan to take over the entire school.

Survival skills have become the new academic focus at the school. As the kids learn to farm, build invisible shelters, and battle horrible beasts, bizarre things begin happening all around them and they must use their newfound skills to survive. Armed only with an unreliable book of enchantment and what they’ve learned so far at Redstone Junior High, they must work together to escape killer cave spiders, a skeleton ambush, and a fierce army of golems. Will they figure out why the beach feels haunted, uncover the secret of the sand witches, and discover why the principal is acting so crazy, or will Grindel and Agatha take over the school and enslave the students forever?

Cara J. Stevens: Cara J. Stevens has a deep and abiding love for video games, science fiction and writing. She began her career designing interactive games and stories based on books and is happy to come full circle, creating stories based on video games. She has written nine other books for kids, including the novel Dragon School. When she’s not writing or hanging out at the beach, she can be found playing pinball, WiiU, and classic Atari games. Cara lives in Old Greenwich, Connecticut with her husband, two children, and a loud, fluffy dog named Oliver.