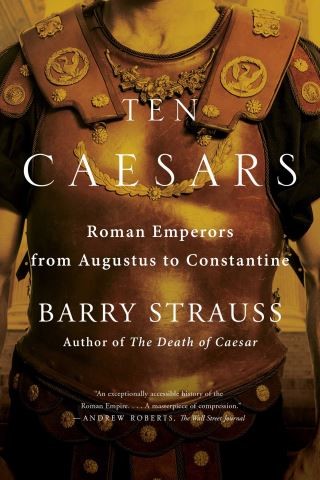 Roman Emperors from Augustus to Constantine

Bestselling classical historian Barry Strauss delivers “an exceptionally accessible history of the Roman Empire…much of Ten Caesars reads like a script for Game of Thrones” (The Wall Street Journal)—a summation of three and a half centuries of the Roman Empire as seen through the lives of ten of the most important emperors, from Augustus to Constantine.

In this essential and “enlightening” (The New York Times Book Review) work, Barry Strauss tells the story of the Roman Empire from rise to reinvention, from Augustus, who founded the empire, to Constantine, who made it Christian and moved the capital east to Constantinople.

During these centuries Rome gained in splendor and territory, then lost both. By the fourth century, the time of Constantine, the Roman Empire had changed so dramatically in geography, ethnicity, religion, and culture that it would have been virtually unrecognizable to Augustus. Rome’s legacy remains today in so many ways, from language, law, and architecture to the seat of the Roman Catholic Church. Strauss examines this enduring heritage through the lives of the men who shaped it: Augustus, Tiberius, Nero, Vespasian, Trajan, Hadrian, Marcus Aurelius, Septimius Severus, Diocletian, and Constantine. Over the ages, they learned to maintain the family business—the government of an empire—by adapting when necessary and always persevering no matter the cost.

Ten Caesars is a “captivating narrative that breathes new life into a host of transformative figures” (Publishers Weekly). This “superb summation of four centuries of Roman history, a masterpiece of compression, confirms Barry Strauss as the foremost academic classicist writing for the general reader today” (The Wall Street Journal).

Barry Strauss: Barry Strauss, professor of history and classics at Cornell University, is a leading expert on ancient military history. He has written or edited several books, including The Battle of Salamis, The Trojan War, The Spartacus War, Masters of Command, The Death of Caesar, and Ten Caesars. Visit BarryStrauss.com.