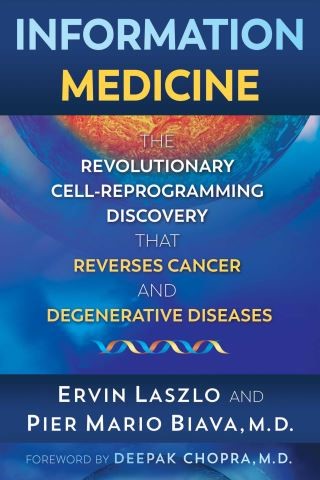 The Revolutionary Cell-Reprogramming Discovery that Reverses Cancer and Degenerative Diseases

• Explains how SCDSFs restore communication between cells and the epigenetic code, the information that programs the normal function and growth of every living cell

The universe is not a mechanical system of matter--it operates like a cosmic network that runs on and is connected by information. Information “in-forms” and underlies all of the physical world, including the human body. In this book, Pier Mario Biava, M.D., and Ervin Laszlo, Ph.D., show how this “information” worldview can be applied to healing and medicine and, specifically, how it underlies a revolutionary new approach to cancer and disease treatment, one that works directly with the epigenetic code--the information that programs the function and growth of every living cell.

The authors explain how tumor growth and cellular dysfunction are manifestations of disconnections in the information network of an organism. Unveiling Dr. Biava’s groundbreaking research on stem cell differentiation stage factors (SCDSFs), they explain how SCDSFs work directly as epigenetic regulators to reconnect aberrant cells to the body’s information network and reset them to their original function--in the case of cancer cells transforming them from malignant to benign, from dysfunction back to normalcy and health. Dr. Biava’s research on SCDSFs--derived from Zebrafish embryos, which have a very high percentage of proteins identical with those of human beings--has shown good success in reprogramming and inhibiting cancer cells in clinical trials with patients with advanced liver cancer, as well as success in in vitro studies with 7 different human tumor lines. SCDSFs have also shown promise in the treatment of chronic diseases such as psoriasis and neurodegenerative diseases. This research will also allow the development of new treatments for Alzheimer’s, Parkinson’s, and multiple sclerosis.

Unveiling the holistic future of medicine, the authors show how we will no longer need to approach the treatment of cancer and other degenerative diseases as a “fight,” but as a restoration of our cells’ original programming. With the advent of Information Medicine, we now have the power to program ourselves to heal.