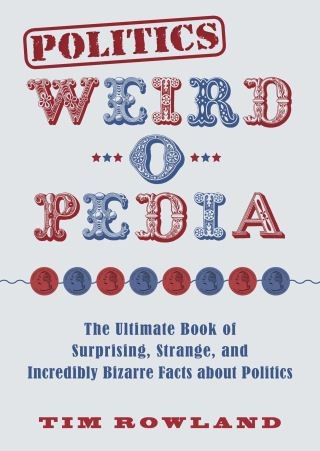 The Ultimate Book of Surprising, Strange, and Incredibly Bizarre Facts about Politics

Government and politics might seem twisted today, but they’ve always been strange.

There’s something about public office that, throughout time, has transcended normalcy. Politics Weird-o-Pedia presents some of the oddest and most interesting political absurdities and tidbits from around the world, from Peter the Great’s tax on beards to a lawmaker’s mistress whom he kept on the congressional payroll despite her admission that “I can't type, I can't file, I can't even answer the phone.”

Tim Rowland: Tim Rowland has authored a number of books, including histories of the Adirondacks and Western Maryland mountains, and the Strange and Obscure series, collections of historical essays focusing on lesser-known aspects of American history. An avid outdoorsman, Rowland has climbed in the Himalayas, hiked the Inca Trail, trekked throughout Europe, and ridden a bicycle across the United States. He has climbed all 46 Adirondack High Peaks over 4,000 feet. He and his wife Beth live in Jay, New York.