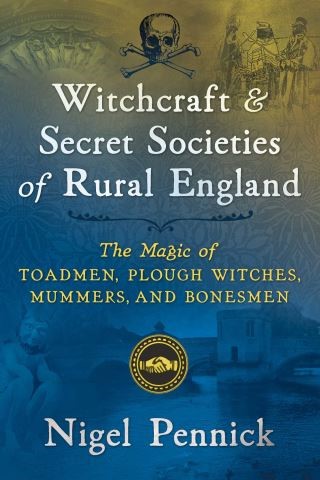 The Magic of Toadmen, Plough Witches, Mummers, and Bonesmen

• Describes the secret rites, ceremonies, and initiation rituals of guilds and rural fraternities such as the Shoemakers, Horsemen, Toadmen, Mummers, and Bonesmen

• Explains their use of masks, black face, and other disguises to avoid persecution

Centuries ago the remote, marshy plains of eastern England--the Fens--were drained to create agricultural land. The Fens remained isolated up until the nineteenth century, and it was this very isolation that helped preserve the ancient traditions of this area, traditions ruthlessly eradicated elsewhere in the British Isles. These magical folk traditions also owe their survival to secret rural societies, from craft guilds and trade unions to Morris dancers and village bands.

Exploring the folk customs and magical traditions of guilds and rural fraternities such as the Shoemakers and Horsemen and the secrets guarded by the Free Gardeners, Witches, Toadmen, and Bonesmen, Nigel Pennick shows how the common working people of the Fens belonged to secret societies based on their specific trade. He details the hidden aspects of rural life that most historians ignore--the magical current that flowed through the lives of working people--and describes the secret rites, ceremonies, oaths, and initiation rituals of the guilds and fraternities to which the folk belonged.

Drawing not only on scholarly research but also his personal contacts within these still living traditions, Pennick explains their use of masks, black face, and other disguises to avoid persecution and describes how wise woman healers and witches in rural villages were sought-after for their remedies. He shares the secrets of the toad-bone rite, which gave the Toadman control over animals and members of the opposite sex, and explores the guardian spirits thought to inhabit the Fens, including those of the Wild Hunt.

Providing insight into a world that has largely disappeared, one whose magic still echoes in lore and legend, Pennick shows that the rites, customs, and ceremonies of guilds and rural fraternities connect individuals to a wider community and, through collective action, to the power of Nature and the Cosmos.

Nigel Pennick: An authority on ancient belief systems, traditions, runes, and geomancy, Nigel Pennick is the author of several books, including The Sacred World of the Celts, Secret Games of the Gods, and The Ancient Science of Geomancy. He lives near Cambridge, England, where he follows the oral tradition and Pagan lore of his native East Anglia.