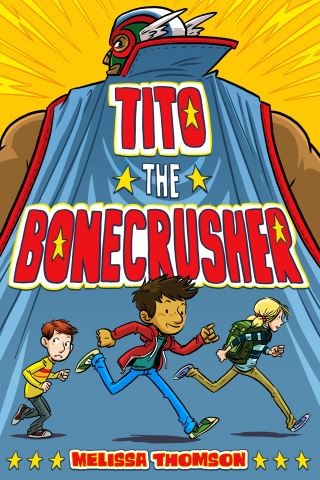 Oliver "Spaghetti-O" Jones's dad is about to be jailed for a crime he didn't commit, and Oliver believes the only way to save him is with the help of his favorite lucha-libre wrestler turned action star, Tito the Bonecrusher. Together with his best friend, Brianna (a.k.a. "Brain"), and their new ally Paul "Popcorn" Robards, Oliver devises a madcap plan to spring his dad from a Florida correctional facility.

Heartwarming and hilarious, this book looks at what it takes to be a hero . . . and what happens when you realize that saving the day might not always be possible.

Melissa Thomson: Melissa Thomson has been both an elementary and middle-school teacher, as well as a literacy coach, in New York and Washington, DC public schools. She is also the author of the Keena Ford chapter book series. Melissa lives in Arlington, Virginia, with her husband and son.