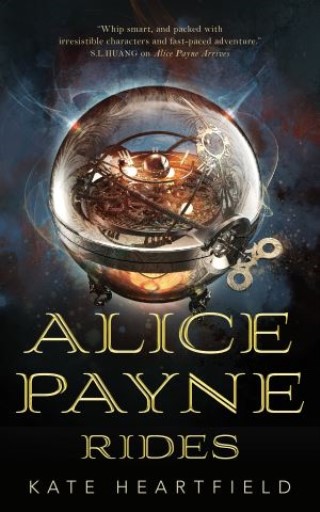 After abducting Arthur of Brittany from his own time in 1203, thereby creating the mystery that partly prompted the visit in the first place, Alice and her team discover that they have inadvertently brought the smallpox virus back to 1780 with them.

Searching for a future vaccine, Prudence finds that the various factions in the future time war intend to use the crisis to their own advantage.

Can the team prevent an international pandemic across time, and put history back on its tracks? At least until the next battle in the time war…

"Twisty time wars, highway robbery, 18th century lady scientists, queer joy. How could I not love this? Alice Payne Arrives at a gallop, breathlessly blending historical fiction and SF tropes, then turning them on their heads." —Sarah Pinsker

"Whip smart, and packed with irresistible characters and fast-paced adventure. A playful, pointed, and brilliantly inventive remix of history that unfolds like the most fascinating puzzle box—each new twist and reveal a delight. Counting the days to the sequel." —S.L. Huang

Kate Heartfield: KATE HEARTFIELD is a former newspaper editor and columnist in Ottawa, Canada. Her first novel, a historical fantasy called Armed in Her Fashion, is published by ChiZine Publications (2018). She also published her interactive novel for Choice of Games, inspired by the Canterbury Tales. Her short fiction has appeared in several magazines and anthologies, including Strange Horizons, Escape Pod and Lackington’s. Her novella “The Course of True Love” was published by Abaddon Books in 2016, as part of the collection Monstrous Little Voices: New Tales from Shakespeare’s Fantasy World.