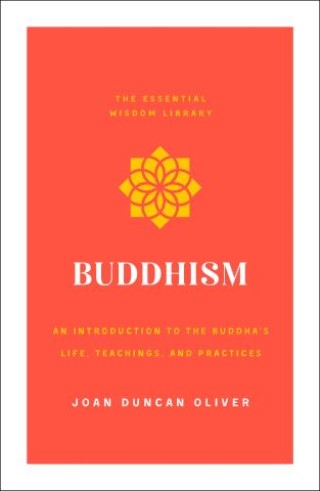 An Introduction to the Buddha's Life, Teachings, and Practices (The Essential Wisdom Library)

A modern guide to the teachings of Buddhism

Buddhism: An Introduction to the Buddha’s Life, Teachings, and Practices is an indispensable guide to a 2,600-year-old wisdom tradition that has transformed the lives of millions across centuries and around the world. Readers will learn how Siddhartha Gautama became the Buddha, one of the most influential spiritual leaders of all time, and discover how they too can follow his revolutionary methods to attain happiness and inner freedom. Along with accessible overviews of central teachings—the Four Noble Truths, the Eightfold Path, karma, core virtues like kindness and compassion, and more—Buddhism covers such basics as:

Writing in an engaging, approachable style, author Joan Duncan Oliver outlines the fundamentals of Buddhism for every reader, revealing its timeless truths and their relevance for finding peace in uncertain times. A practitioner of Buddhist meditation for forty years, Oliver has written extensively on Buddhist wisdom and its application to daily life. Her practical approach makes Buddhism an essential modern guidebook to an ancient tradition.

Joan Duncan Oliver: JOAN DUNCAN OLIVER is a contributing editor at Tricycle: The Buddhist Review and an award-winning journalist whose work has appeared in such publications as The New York Times, O: the Oprah Magazine, Health, Shambhala Sun, and The Best Buddhist Writing 2005. Her books include Happiness, Good Karma, Coffee with the Buddha, The Meaning of Nice, and Commit to Sit, an anthology of articles from Tricycle. A Buddhist practitioner for 40 years, she has studied with teachers from the Zen, Vipassana, and Tibetan Buddhist traditions, and from Bön, the indigenous religion of Tibet.