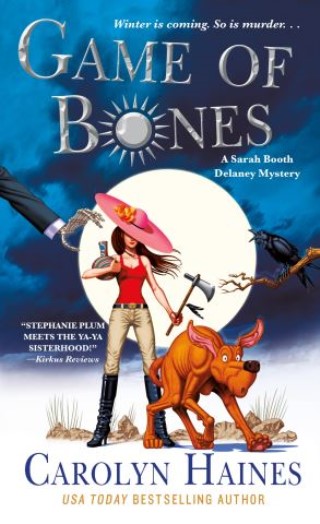 When a ritually murdered corpse is discovered at the new-found Native-American temple site smack in the middle of Sunflower County, Mississippi, the archaeology crew on the dig is immediately under suspicion — with particular focus on its handsome, flirtatious leader, Dr. Frank Hafner. So when Sheriff Coleman Peters closes in on him, Hafner does the only logical thing: he hires the Delaney Detective Agency to clear his name.

Rumors swirl around Mount Salla, the burial mound created centuries before by the local Native tribes, and no one is sure what the site contains — bones, pottery, treasures, or a curse — but the victims start to add up. Sarah Booth and her partner, Tinkie, have too many likely suspects to whittle down the list. It’s a race against time once Sarah Booth’s resident ghost, Jitty, in the guise of various Native American warrior women, points to the waxing of the coming Crow Moon as the time of maximum danger.

Death and mystery cloak the site, and Sarah Booth isn’t sure who to trust or what to believe. But she won’t rest until she’s dug up the truth.

Carolyn Haines: Carolyn Haines is the USA Today bestselling author of the Sarah Booth Delaney mystery series and a number of other books in mystery and crime, including the Pluto's Snitch paranormal-historical mystery series, and Trouble, the black cat detective romantic suspense books. She is the recipient of the Harper Lee Award for Distinguished Writing, the Richard Wright Award for Literary Excellence, and the Mississippi Writers Guild Lifetime Achievement Award. She is a former journalist, bartender, photographer, farmhand, and college professor and lives on a farm where she works with rescue cats, dogs, and horses.