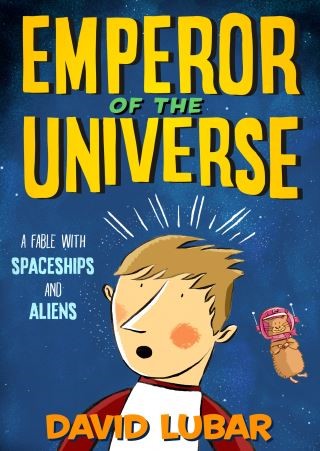 Emperor of the Universe

The launch of a hilarious space adventure trilogy for young readers by David Lubar, author of the popular Weenies Tales!

When seventh grader Nicholas V. Landrew, his beloved pet gerbil Henrietta, and a package of ground beef are beamed aboard an alien space ship, they soon find themselves on the run in a madcap chase across the universe.

Now all Nicholas wants to do is get back home before his parents find out and ground him forever, but with the Universal Police hot on his trail, that won’t be easy. Before it’s all over, Henrietta will find herself safely ensconced back in her cage, Nicholas will be crowned Emperor of the Universe, and something even more surprising will happen to the package of ground beef.

"David Lubar’s Emperor of the Universe is The Hitchhiker’s Guide to the Galaxy for middle school!" —Alan Gratz, bestselling author of Refugee

David Lubar: Ever since DAVID LUBAR was little, he has traveled to alien planets, fantasy realms, and Earthly wonders by means of books. He’s thrilled he can help launch others on this journey through his own novels and short stories. In the past 25 years, he’s written more than fifty books for young readers, including Hidden Talents (an ALA Best Book for Young Adults), My Rotten Life, which is currently under development for a cartoon series, and the Weenies Tales short story collections, which have sold more than 2.7 million copies. He grew up in Morristown, NJ, and currently lives in Nazareth, PA with his awesome wife, and not too far from his amazing daughter and son-in-law. In his spare time, he takes naps on the couch.