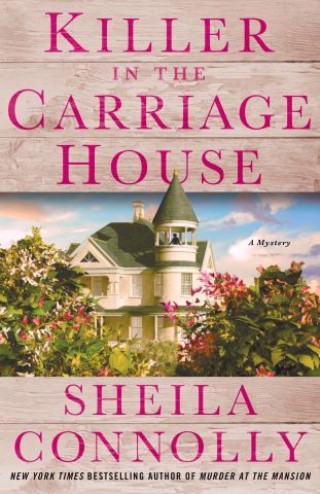 Killer in the Carriage House

Welcome back to Asheboro, Maryland, where real estate can be a matter of life and death. Killer in the Carriage House is the second book in the Victorian Village Mystery series from New York Times bestselling author Sheila Connolly.

Coming back to her hometown was never on the agenda for hotelier Katherine Hamilton. But when she’s offered a chance to lead the charge of transforming the landscape into a Victorian village and tourist attraction, Kate can’t quite refuse. The only problem? Nobody in Asheboro has the passion, nor the funds, to get plans off the ground. . .until Kate teams up with handsome historian Joshua Wainwright, who has ambitious ideas of his own involving an old mansion and a treasure-trove of documents that could attract investors and help seal the deal.

Then, just as Kate and Josh seem ready to pull the trigger, a dead body turns up in the town library. Do these mysterious papers spell danger instead of dollars? That’s what Kate intends to find out before all bets are off…and someone else ends up six feet under.

Sheila Connolly: SHEILA CONNOLLY has published over thirty mysteries, including several New York Times bestsellers. Her series include the Orchard Mysteries, the Museum Mysteries, The County Cork Mysteries, and the Victorian Village Mysteries. She is a member of the Daughters of the American Revolution and the Society of Mayflower Descendants, and owns a cottage in West Cork. She lives in a too-big Victorian in southeastern Massachusetts with her husband and three cats.