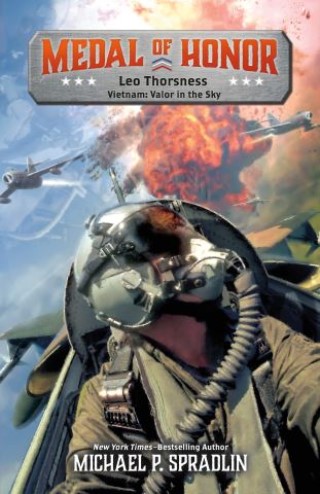 Vietnam: Valor in the Sky

For middle-grade readers, the true story of a pilot in the U.S. Air Force who received the Medal of Honor for his great acts of aerial valor.

Lieutenant Colonel Leo K. Thorsness was a Wild Weasel pilot in the Vietnam War, targeting enemy missile sites. On a 1967 mission, when his wingmen ejected from their burning aircraft, Thorsness initiated attacks on enemy planes and other daring maneuvers in order to protect them. Two weeks later, he was shot down and would become a P. O. W. for the next six years.

This is the third nonfiction middle-grade book in the Medal of Honor series, which profiles the courage and accomplishments of recipients of the Medal of Honor, the highest and most prestigious personal military decoration, awarded to recognize U.S. military service members who have distinguished themselves through extraordinary acts of valor.

Michael P. Spradlin: Michael P. Spradlin is the New York Times–bestselling and Edgar Award–nominated author of more than a dozen books for children, including the Western Heritage Award–winning Off Like the Wind: The Story of the Pony Express. Spradlin grew up in Homer, Michigan, and attended Central Michigan University where he graduated with a BS degree in history in 1982. He currently resides in Lapeer, Michigan, with his wife, daughter, and two schnoodles, Apollo and Willow.