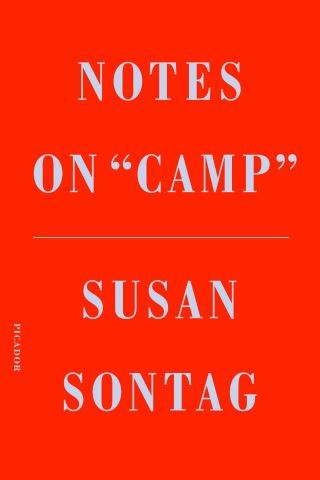 From one of the greatest prose stylists of any generation, the essay that inspired the theme of the 2019 Met Gala, Camp: Notes on Fashion

Many things in the world have not been named; and many things, even if they have been named, have never been described. One of these is the sensibility—unmistakably modern, a variant of sophistication but hardly identical with it—that goes by the cult name of “Camp.”

So begins Susan Sontag’s seminal essay “Notes on ‘Camp.’ ” Originally published in 1964 and included in her landmark debut essay collection Against Interpretation, Sontag’s notes set out to define something that even the most well-informed could describe only as “I know it when I see it.” At once grounded in a sweeping history (Louis XIV was pure Camp) and entirely provisional, Camp delights in low and high culture alike. Tiffany lamps, the androgynous beauty of Greta Garbo, King Kong (1933), and Mozart all embody the Camp sensibility for Sontag—an almost ineffable blend of artifice, extravagance, playfulness, and a deadly seriousness. At the time Sontag published her essay, Camp, as a subversion of sexual norms, had also become a private code of signification for queer communities.

In nearly every genre and form—from visual art, décor, and fashion to writing, music, and film—Camp continues to be redefined today, as seen in the 2019 Met Gala that took Sontag’s essay as the basis for its theme. “Style is everything,” Sontag tells us, and as Time magazine points out, “ ‘Notes on “Camp” ’ launched a new way of thinking,” paving the way for a whole new style of cultural criticism, and describing what is, in many ways, the defining sensibility of our culture today.

Susan Sontag: Susan Sontag (1933–2004) was the author of numerous works of nonfiction, including the groundbreaking collection of essays, Against Interpretation (FSG, 1966), and of four novels, including In America (FSG, 2000), which won the National Book Award.