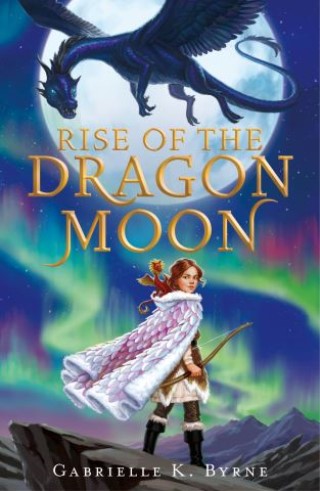 Rise of the Dragon Moon

The princess of a frozen queendom fights to free her mother from the clutches of terrifying dragons in Rise of the Dragon Moon, a middle grade fantasy debut from Gabrielle K. Byrne.

Princess Toli may be heir to the throne, but she longs to be a fierce hunter and warrior. Alone in a frozen world, her queendom is at the mercy of the dragons that killed her father, and Toli is certain it’s only a matter of time before they come back to destroy what’s left of her family.

When the dragons rise and seize her mother, Toli will do anything to save her—even trust a young dragon who may be the only key to the Queen's release.

With her sister and best friend at her side, Toli makes the treacherous journey across the vast ice barrens to Dragon Mountain, where long-held secrets await. Bear-cats are on their trail, and dragons stalk them, but the greatest danger might be a mystery buried in Toli’s past.

"Enthralling, masterful storytelling—a perfect blend of adventure and coming-of-age, and deliciously scary in parts. My head is still filled with glorious dragons."—Karen Foxlee, author of Ophelia and the Marvelous Boy

"The dragons...seethe and swirl off the pages. Fans of Erin Hunter’s “Warriors” series will enjoy." —School Library Journal

Gabrielle K. Byrne lives in the rainy wilds of the Pacific Northwest, where she writes fantasy for kids of all ages. Gabby studied opera in Philadelphia, medieval studies in New York, literature in Scotland, and marine biology in the Pacific Northwest, but writing stories is the common thread that ties all her interests together. When she’s not writing, she can be found fishing spineless beasties out of the Salish Sea with her husband and two daughters. Gabby is a mentor for the Pitch Wars writing contest, and a contributor at The Winged Pen blog.
Rise of the Dragon Moon is her first book.