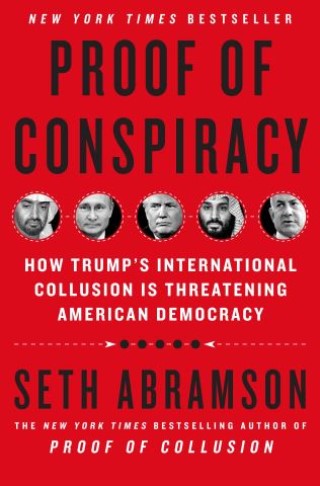 "A richly documented indictment of power and corruption." —Kirkus Reviews

In late 2015, convicted pedophile, international dealmaker, and cooperating witness in Special Counsel Robert Mueller’s Russia investigation George Nader convened a secret meeting aboard a massive luxury yacht in the Red Sea. Nader pitched Saudi Crown Prince Mohammed bin Salman, Emirati Crown Prince Mohammed bin Zayed, Egyptian President Abdel Fattah el-Sisi and other Middle Eastern leaders a plan for a new pro-U.S., pro-Israel alliance of Arab nations that would fundamentally alter the geopolitics of the Middle East while marginalizing Iran, Qatar, and Turkey. To succeed, the plan would need a highly placed American politician willing to drop sanctions on Russia so that Vladimir Putin would in turn agree to end his support for Iran. They agreed the perfect American partner was Donald Trump, who had benefited immensely from his Saudi, Emirati, and Russian dealings for many years, and who, in 2015, became the only U.S. presidential candidate to argue for a unilateral end to Russian sanctions and a far more hostile approach to Iran.

Seth Abramson: Seth Abramson is a former criminal defense attorney and criminal investigator who teaches digital journalism, legal advocacy, and cultural theory at the University of New Hampshire. A regular political and legal analyst on CNN and the BBC during the Trump presidency, he is the author of eleven books and editor of five anthologies. Abramson is a graduate of Dartmouth College, Harvard Law School, the Iowa Writers’ Workshop, and the PhD program in English at University of Wisconsin-Madison. He lives in New Hampshire with his wife and two one-year-old rescue hounds, Quinn and Scout. Read more about him at SethAbramson.net.