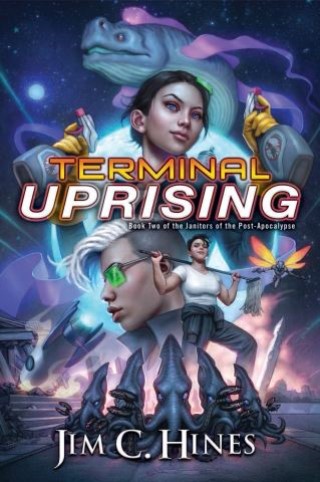 The Krakau came to Earth in the year 2104. By 2105, humanity had been reduced to shambling, feral monsters. In the Krakau’s defense, it was an accident, and a century later, they did come back and try to fix us. Sort of.

Between trying to protect their secrets and fighting the xenocidal Prodryans, who’ve been escalating their war against everyone who isn’t Prodryan, the Krakau have their tentacles full.

Mops’ mission changes when she learns of a secret Krakau laboratory on Earth. A small group under command of Fleet Admiral Belle-Bonne Sage is working to create a new weapon, one that could bring victory over the Prodryans … or drown the galaxy in chaos.

To discover the truth, Mops and her rogue cleaning crew will have to do the one thing she fears most: return to Earth, a world overrun by feral apes, wild dogs, savage humans, and worse. (After all, the planet hasn’t been cleaned in a century and a half!) What Mops finds in the filthy ruins of humanity could change everything, assuming she survives long enough to share it.

Perhaps humanity isn’t as dead as the galaxy thought.

Jim C. Hines: Jim C. Hines is the author of numerous fantasy novels, including the Magic ex Libris series, the Princess series of fairy tale retellings, and the humorous Goblin Quest trilogy. He’s an active blogger, and won the 2012 Hugo Award for Best Fan Writer. He lives in mid-Michigan with his family.