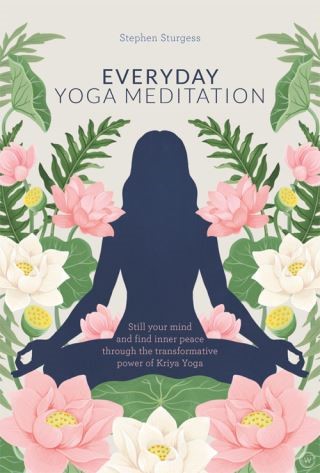 A beautiful colour, illustrated book of authentic Yoga Meditation techniques that encourage the practice of Yoga in its broadest sense – as a vehicle for calming the mind, enhancing awareness and contentment, and developing deep inner peace.

Drawing mainly on the tradition of Kriya Yoga – the goal of which is to attune individual consciousness with the Divine, or Universal, Consciousness – yoga and meditation teacher Stephen Sturgess reveals in this book how to progress beyond the supple body to the vital, contented mind.

After first explaining the deep value of Yoga Meditation, outlining the Eight Limbs of Yoga (as presented by ancient sage Patanjali in his Yoga Sutras text) and giving clear, comprehensive explanations of our internal energy system (including kundalini, chakras, nadis, the three bodies and the five sheaths), Stephen then goes on to present a wide range of yoga practices that can be used as a regular holistic health programme. If we were to view the body as a temple, the combination of asana, purification and pranayama practices first cleans the temple windows – building the physical body and mind – while the meditations then shine light into the inner sanctum – lighting up the Inner Self and enabling a deep sense of spirituality and peace.

A section at the end is then devoted to helping readers develop their personal practice, including advice on living with increased awareness, how to make yoga meditation a daily reality and a range of specially designed morning and evening routines, from a 15-minute programme up to 1 hour 45.

In summary, readers are guided on a practical and nurturing journey towards a sense of enhanced calm, joy, happiness, harmony and personal fulfilment in life, where they will experience their fullest potential for both creative thought and action.

Stephen Sturgess is a yoga and meditation teacher who has studied and practised a wide range of yoga forms under the expertise of well-known gurus over the course of 35 years. It was in 1982 that he discovered Kriya Yoga as his true spiritual path and Paramhansa Yogananda as his guru, and it is the Yoga Meditation techniques from this tradition on which this book is based. He was first initiated into Kriya in May 1984 by his teacher Swami Kriyananda, and later also by Roy Eugene-Davis, who had been initiated into Kriya by Paramhansa Yogananda himself in August 1951. Stephen is also the author of a range of books, including The Yoga Book (Watkins, 2004), a recommended text of the British Wheel of Yoga; The Book of Chakras & Subtle Bodies (Watkins, 2014); The Supreme Art and Science of Raja and Kriya Yoga (2015); Mastering the Mind, Realising the Self (2017); and Willpower and Energy (2018).