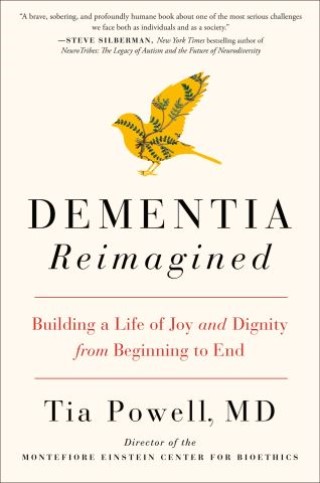 Building a Life of Joy and Dignity from Beginning to End

The cultural and medical history of dementia and Alzheimer's disease by a leading psychiatrist and bioethicist who urges us to turn our focus from cure to care.

Despite being a physician and a bioethicist, Tia Powell wasn't prepared to address the challenges she faced when her grandmother, and then her mother, were diagnosed with dementia--not to mention confronting the hard truth that her own odds aren't great. In the U.S., 10,000 baby boomers turn 65 every day; by the time a person reaches 85, their chances of having dementia approach 50 percent. And the truth is, there is no cure, and none coming soon, despite the perpetual promises by pharmaceutical companies that they are just one more expensive study away from a pill. Dr. Powell's goal is to move the conversation away from an exclusive focus on cure to a genuine appreciation of care--what we can do for those who have dementia, and how to keep life meaningful and even joyful.

Reimagining Dementia is a moving combination of medicine and memoir, peeling back the untold history of dementia, from the story of Solomon Fuller, a black doctor whose research at the turn of the twentieth century anticipated important aspects of what we know about dementia today, to what has been gained and lost with the recent bonanza of funding for Alzheimer's at the expense of other forms of the disease. In demystifying dementia, Dr. Powell helps us understand it with clearer eyes, from the point of view of both physician and caregiver. Ultimately, she wants us all to know that dementia is not only about loss--it's also about the preservation of dignity and hope.

Tia Powell: Dr. Tia Powell is Director of the Montefiore Einstein Center for Bioethics and of the Einstein Cardozo Master of Science in Bioethics program. She is Professor of Epidemiology, Division of Bioethics, and Psychiatry. She has bioethics expertise in public policy, dementia, consultation, end of life care, decision-making capacity, bioethics education and the ethics of public health disasters. She served four years as Executive Director of the New York State Task Force on Life and the Law, which functions as New York State's bioethics commission. She has worked with the Institute of Medicine on many projects related to public health and ethics, and most recently served on the 2017 report on community approaches to address health inequities. She is a board certified psychiatrist and Fellow of the New York Academy of Medicine, the American Psychiatric Association and The Hastings Center.