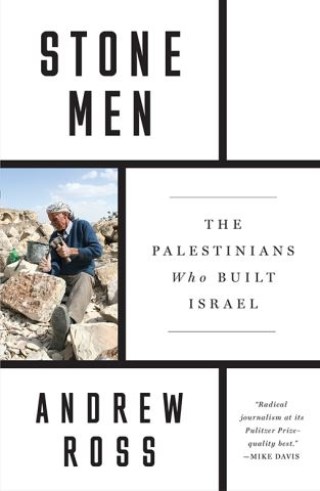 The Palestinians Who Built Israel

Winner of the 2019 Palestine Book Awards

“They demolish our houses while we build theirs.”

This is how a Palestinian stonemason, in line at a checkpoint outside a Jerusalem suburb, described his life to Andrew Ross. Palestinian “stone men,” using some of the best-quality limestone deposits in the world and drawing on generations of artisanal knowledge, have built almost every state in the Middle East except one of their own. Today the business of quarrying, cutting, fabricating, and dressing is the Occupied Territories’ largest private employer and generator of revenue, and supplies the construction industry in Israel, along with other countries in the region and overseas.

Ross’s engrossing, surprising, and gracefully written story of this fascinating ancient trade shows how the stones of historic Palestine, and Palestinian labor, have been used to build the state of Israel—in the process, constructing “facts on the ground”—even while the industry is central to Palestinians’ own efforts to erect bulwarks against the Occupation. For more than a century, the hands that built Israel’s houses, schools, offices, bridges, and even its separation barriers have been Palestinian. Looking at the Palestinian–Israeli conflict in a new light, this book, largely based on field interviews in the region, asks how this record of labor and achievement can and should be recognized.

Andrew Ross: Andrew Ross is Professor of Social and Cultural Analysis at New York University, and a social activist. A contributor to The Nation, the Village Voice, New York Times, and Artforum, he is the author of many books, including, most recently, Bird on Fire: Lessons from the World's Least Sustainable City and Nice Work if You Can Get It: Life and Labor in Precarious Times. He lives in New York.