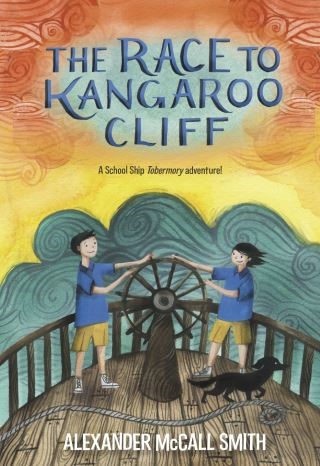 The Race to Kangaroo Cliff

In this third and final installment of the School Ship Tobermory adventure series, the same loveable cast and crew are back, sailing to new locales in Australia with adventures that don't disappoint.

Ben and Fee MacTavish and the rest of the school ship Tobermory crew head to Australia to take part in a tall ships race. But after a good start, the Tobermory unexpectedly changes course to rescue a local boy, Will, who is stranded on the rocks. When the ship's dog, Henry, disappears, Will helps Ben, Fee, and their friends find him, but as the trail leads them deeper into the Outback, they begin to realize that a missing dog is the least of their problems. Join the crew aboard the Tobermory as they set sail from their home base in Mull to the Southern Hemisphere on an adventure they won't soon forget.

Alexander McCall Smith: ALEXANDER MCCALL SMITH is the author of the bestselling No. 1 Ladies' Detective Agency series. He has also written over thirty books for younger readers, including a series featuring the young Precious Ramotswe--one of the world's most famous fictional private detectives. McCall Smith is also the author of School Ship Tobermory and The Sands of Shark Island, companion novels to The Race to Kangaroo Cliff. Visit him online at alexandermccallsmith.com and on Facebook, and follow him on Twitter at @McCallSmith.

IAIN MCINTOSH's illustrations have won awards in the worlds of advertising, design, and publishing. He has illustrated many of Alexander McCall Smith's books.