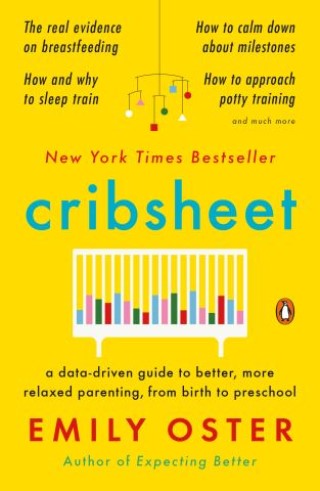 A Data-Driven Guide to Better, More Relaxed Parenting, from Birth to Preschool

An NPR Book of the Year

From the author of Expecting Better, an economist's guide to the early years of parenting.

"The book is jampacked with information, but it’s also a delightful read because Oster is such a good writer." —NPR

With Expecting Better, award-winning economist Emily Oster spotted a need in the pregnancy market for advice that gave women the information they needed to make the best decision for their own pregnancies. By digging into the data, Oster found that much of the conventional pregnancy wisdom was wrong. In Cribsheet, she now tackles an even greater challenge: decision-making in the early years of parenting.

As any new parent knows, there is an abundance of often-conflicting advice hurled at you from doctors, family, friends, and strangers on the internet. From the earliest days, parents get the message that they must make certain choices around feeding, sleep, and schedule or all will be lost. There's a rule—or three—for everything. But the benefits of these choices can be overstated, and the trade-offs can be profound. How do you make your own best decision?

Armed with the data, Oster finds that the conventional wisdom doesn't always hold up. She debunks myths around breastfeeding (not a panacea), sleep training (not so bad!), potty training (wait until they're ready or possibly bribe with M&Ms), language acquisition (early talkers aren't necessarily geniuses), and many other topics. She also shows parents how to think through freighted questions like if and how to go back to work, how to think about toddler discipline, and how to have a relationship and parent at the same time.

Economics is the science of decision-making, and Cribsheet is a thinking parent's guide to the chaos and frequent misinformation of the early years. Emily Oster is a trained expert—and mom of two—who can empower us to make better, less fraught decisions—and stay sane in the years before preschool.

Emily Oster: Emily Oster is a professor of economics at Brown University and the author of Expecting Better: Why the Conventional Pregnancy Wisdom is Wrong--and What You Really Need to Know. She was a speaker at the 2007 TED conference and her work has been featured in The New York Times, The Wall Street Journal, Forbes, and Esquire. Oster is married to economist Jesse Shapiro and is also the daughter of two economists. She has two children.