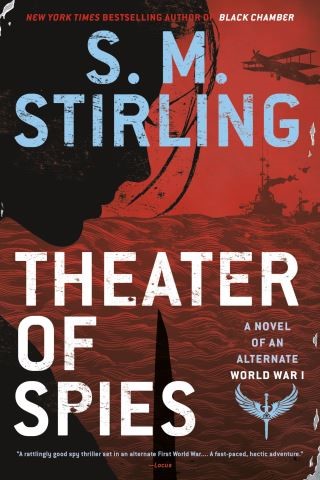 The second novel in an alternate history series where Teddy Roosevelt is president once more right before WWI breaks out, and on his side is the Black Chamber, a secret spy network watching America's back.

After foiling a German plot to devastate America's coastal cities from Boston to Galveston, crack Black Chamber agent Luz O'Malley and budding technical genius Ciara Whelan go to California to recuperate. But their well-deserved rest is cut short by the discovery of a diabolical new weapon that could give the German Imperial Navy command of the North Sea.

Luz and Ciara must go deep undercover and travel across a world at war, and live under false identities in Berlin itself to ferret out the project's secrets. Close on their trail is the dangerous German agent codenamed Imperial Sword, who is determined to get his revenge, and a band of assault-rifle equipped stormtroopers, led by the murderously efficient killer Ernst Röhm.  From knife-and-pistol duels on airships to the horrors of the poison-gas factories to harrowing marine battles in the North Sea, the fight continues--with a world as the prize.

S. M. Stirling: S. M. Stirling is the author of many science fiction and fantasy novels including Black Chamber, Dies the Fire, The Sky-Blue Wolves, and Islands in the Sea of Time. A former lawyer and an amateur historian, he lives with his wife, Jan.