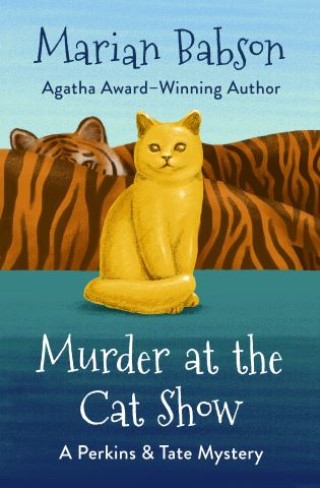 Murder at the Cat Show

British public relations firm Perkins & Tate are used to dealing with show business—but this time, the celebrities are cats. The company’s been hired to publicize a major event for cat fanciers, but even if the felines in attendance are dignified, elegant, and well trained, the same doesn’t always hold true for the humans . . .

After a valuable cat statue disappears—and the exhibit’s much-disliked organizer is found dead in a cage with two Sumatran tigers—Douglas Perkins and Gerry Tate must sniff out a two-legged beast.

“The appearance of this second-in-a-series from England will gladden Babson’s numerous aficionados in America. . . . Suspenseful action . . . While many convincingly real cats compete for the reader’s affections, even Doug, expressing indifference to feline charms, falls helplessly in love with a wistful kitten.” —Publishers Weekly

“For the marvels of metamorphosis, stick to Kafka. For the joy of cats, consider Ms. Babson.” —The New York Times Book Review on Nine Lives to Murder

Marian Babson:
Marian Babson, born Ruth Stenstreem, is an American mystery writer. Her first published work was Cover-Up Story (1971), and she has written over forty-five mysteries. Babson served as secretary of the Crime Writers’ Association and was awarded the CWA Dagger in the Library in 1996.