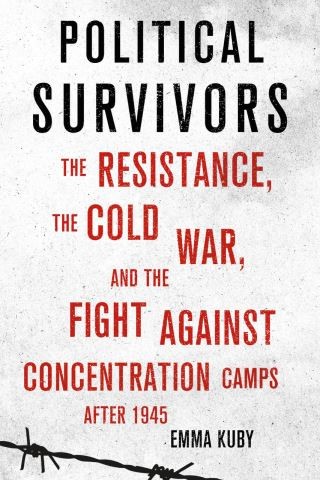 The Resistance, the Cold War, and the Fight against Concentration Camps after 1945

In 1949, as Cold War tensions in Europe mounted, French intellectual and former Buchenwald inmate David Rousset called upon fellow concentration camp survivors to denounce the Soviet Gulag as a "hallucinatory repetition" of Nazi Germany's most terrible crime. In Political Survivors, Emma Kuby tells the riveting story of what followed his appeal, as prominent members of the wartime Resistance from throughout Western Europe united to campaign against the continued existence of inhumane internment systems around the world. The International Commission against the Concentration Camp Regime brought together those originally deported for acts of anti-Nazi political activity who believed that their unlikely survival incurred a duty to bear witness for other victims. Over the course of the next decade, these pioneering activists crusaded to expose political imprisonment, forced labor, and other crimes against humanity in Franco's Spain, Maoist China, French Algeria, and beyond.

Until now, the CIA's secret funding of Rousset's movement has remained in the shadows. Kuby reveals this clandestine arrangement between European camp survivors and American intelligence agents. She also brings to light how Jewish Holocaust victims were systematically excluded from Commission membership – a choice that fueled the group's rise, but also helped lead to its premature downfall. The history that she unearths provides a striking new vision of how wartime memory shaped European intellectual life and ideological struggle after 1945, showing that the key lessons Western Europeans drew from the war centered on "the camp," imagined first and foremost as a site of political repression rather than ethnic genocide. Political Survivors argues that Cold War dogma and acrimony, tied to a distorted understanding of WWII's chief atrocities, overshadowed the humanitarian possibilities of the nascent anti-concentration camp movement as Europe confronted the violent decolonizing struggles of the 1950s.