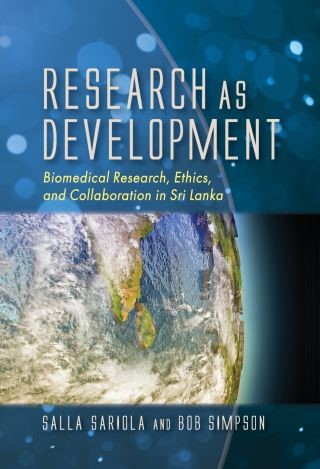 In Research as Development, Salla Sariola and Bob Simpson show how international collaboration operates in a setting that is typically portrayed as "resource-poor" and "scientifically lagging." Based on their long-term fieldwork in Sri Lanka, Sariola and Simpson bring into clear ethnographic focus the ways international scientific collaborations feature prominently in the pursuit of global health in which research operates "as" development and not merely "for" it.

The authors follow the design, inception, and practice of two clinical trials: one a global health charity funded trial and the other a pharmaceutical industry-sponsored trial. Research as Development situates these two trials within their historical, political and cultural contexts and thus counters the idea that local actors are merely passive recipients of new technical and scientific rationalities.

While social studies of clinical trials are beginning to be an established niche in academic writing, Research as Development helps fill important gaps in the literature through its examination of clinical research situated in cultures in low-income settings. Research as Development is noteworthy for the way it highlights the critical and creative role that local researchers play in establishing international collaborations and making them work into locally viable forms. The volume shows how these clinical and research interactions bring about changes in culture, technologies and expertise in Sri Lanka, contexts that have not previously been written about in any detail.