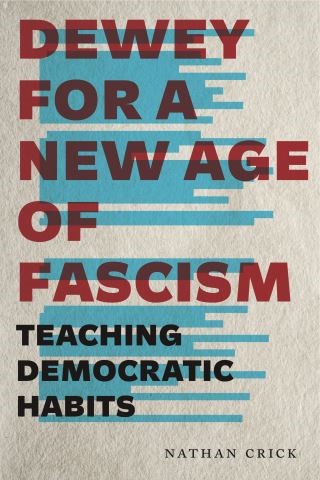 Dewey for a New Age of Fascism

During the rise of fascism in the early twentieth century, American philosopher and educational reformer John Dewey argued that the greatest threat to democracy was not a political regime or even an aggressive foreign power but rather a set of dispositions or attitudes. Though not fascist in and of themselves, these habits of thought—rugged individualism and ideological nationalism—lay the foundation for fascism. In this study, Nathan Crick uses Dewey’s social thought and philosophy of education to provide insight into and resources for transforming our present-day politics.

Through a close reading of Dewey’s political writings and educational theory, Crick elaborates Dewey’s vision of democratic social life and the education required for its foundation. He shows that for Dewey, communication is essential to cultivating sympathy, intelligence, and creativity—habits of thought that form the core of democratic culture. Crick then lays out a broad curriculum of logic, aesthetics, and rhetoric for inculcating these habits in the classroom, arguing that if we are to meet the challenge of fascism, we must teach these new arts as if our civilization depends on it—because in our new age of politics, it does.

Comprehensive and pragmatic, this book presents an experimental model of education that can be applied across the humanities curriculum. It will be of interest to teachers of writing, composition, and rhetoric as well as scholars and students of communication studies, pedagogy, and political theory.