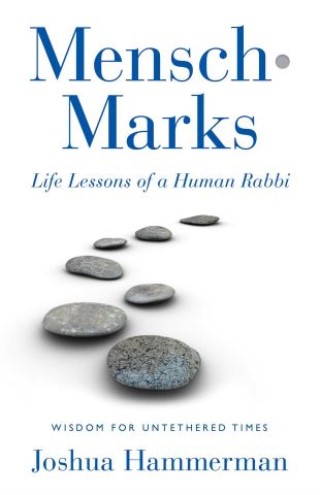 Life Lessons of a Human Rabbi—Wisdom for Untethered Times

The Talmud states, "In a world that lacks humanity, be human." In a world as untethered as ours has become, simply being human, a good person, is a measure of heroism. At a time when norms of civility are being routinely overwhelmed, it may be the only measure that matters. Mensch-Marks represents Rabbi Joshua Hammerman's personal Torah scroll—the sacred text of his experiences, the life lessons he has learned along his winding, circuitous journey. Mirroring 42 steps Israel wandered in the Wilderness, Hammerman offers 42 brief essays, several of which first appeared in The New York Times Magazine,  organized into categories of character, or "mensch-marks," each one a stepping stone toward spiritual maturation. These essays span most of Rabbi Hammerman's life, revealing how he has striven to be a "mensch," a human of character, through every challenge.


Mensch-Marks creates a brand-new genre. It is memoir as sacred story, as how-to book; a series of personal vignettes in dialogue with one another over the span of decades, resonating with eternal ideas that span centuries. It traces the author's own personal growth while providing a road map for people of all backgrounds seeking a life of moral vision. The wisdom is shared not from a pulpit on high, but rather from an unfolding story of a fellow traveler, one who has stumbled, failed, and persevered, struggling with the questions large and small. Through it all, Rabbi Hammerman has tried to live with dignity and grace, what he calls the "nobility of normalcy."
He writes, "If by sharing what I've learned, I can add a modicum of generosity, honesty and human connection in a world overflowing with cruelty, loneliness and deceit, then I'll have done my job.' The essays cover crucial moments of failure and forgiveness, loving and letting go, finding deeper meaning in one's work, and holiness in the seemingly inconsequential moments of everyday life.  Rabbi Hammerman, ever the optimist, believes that we can turn things around, one mensch at a time.

Joshua Hammerman: Joshua Hammerman, a celebrated rabbi and award-winning journalist and blogger, has served Temple Beth El in Stamford, Connecticut, for over three decades. Author of thelordismyshepherd.com: Seeking God in Cyberspace, his essays have appeared in The New York Times Magazine, The Washington Post, Times of Israel, The New York Jewish Week and many other places.Rabbi Hammerman was a winner of the Simon Rockower Award, the highest honor in Jewish journalism, for columns on the Bernard Madoff case. In 2018, he received an award from the Religion News Association for excellence in commentary. He has been a champion of inclusiveness and innovation in synagogue life, focusing on creating an oasis of warmth, love and mutual respect, while at the same time, challenging congregants—and himself—to reach ever higher in setting spiritual and ethical objectives. Rabbi Hammerman received ordination from the Jewish Theological Seminary after getting an MA in journalism from NYU and a BA, magna cum laude, from Brown University. He and his wife, Dr. Mara Hammerman, a psychologist, are the proud parents of Ethan and Dan, along with three standard poodles.