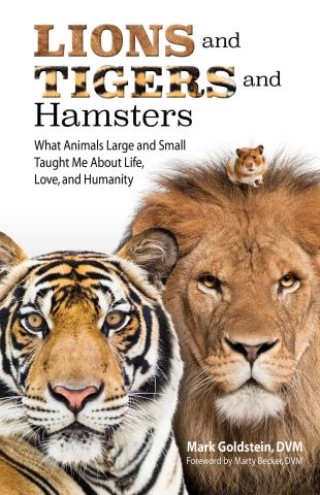 Lions and Tigers and Hamsters

What Animals Large and Small Taught Me About Life, Love, and Humanity

From the time Dr. Mark Goldstein was a little boy—even before he had his first dog—he was fascinated by creatures both domestic and wild. After graduating veterinary school at Cornell University, he became a veterinarian in clinical practice, then director of zoos in Boston and Los Angeles, then head of a progressive humane society where he advocated for animal welfare. During his extraordinary 30-year career, Dr. Mark has accrued a lifetime of experiences working with all sorts of animals and the people who care for them.

Dr. Mark's life with animals taught him more than how to be a great doctor, it taught him how to live life. The stories in this book reflect those lessons; they will make you laugh and cry as they entertain and amaze you. Each real-life experience sheds light on the challenges and hard work of the talented individuals who work in the world of animal welfare. These are stories that illustrate the tremendous impact animals have on our daily lives—they are hallmarks of the sacred importance of the human-animal bond.

On your journey through the exhilarating life of Dr. Mark, you'll meet some of the finned, furred, and feathered animals who offered him invaluable insights—Harold the hamster, Sasha the Siberian tiger, St. Francis the German Shepherd, Ralph the buffalo, Gus the stallion, Frank the goldfish, and many more fascinating creatures!

Mark Goldstein: Mark Goldstein, DVM, has spent over 40 years caring, advocating, and fighting for the welfare of animals. The institutions he worked at are all recognized leaders in their respective fields and the variety of animals he worked with and his responsibilities were unique. He was a senior staff clinician in the medicine department at Angell Memorial Animal Hospital in Boston. After being hired to head the Boston Zoos, he led a turnaround for the failing inner city Franklin Park Zoo. "Dr. Mark" then moved west with his wife Kristine and their two daughters when he was appointed to lead the Los Angeles Zoo. He followed his heart to shine a light on the importance of the human-animal bond and took the helm at the San Diego Humane Society and SPCA where he oversaw the design, development, and completion of the "San Diego Campus for Animal Care." Many aspects of the campus, its programs and its unique partnership with the municipal animal care department have been copied numerous times both nationally and internationally. He has a BS in Animal Science and a DVM degree from Cornell University.