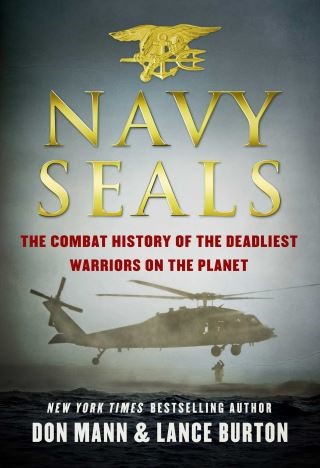 The Combat History of the Deadliest Warriors on the Planet

New York Times bestselling authorDon Man and Lance Burton tell the history of the most respected and feared fighting force every created—The US Navy SEALs.

“For those brave souls—past, present, and future—and those who wish to honor them—their story is in the pages that follow.”

From their birth in World War II as combat swimmers clearing the beaches of Normandy to their evolution into fighting men who could operate anywhere in the world by sea, air, or land, the intrepid story of the US Navy SEALs is one of courage, sacrifice, and world-renowned toughness that echoes of other great military units of history—the Spartans, the Roman legions, or the samurai. Take a look inside to find out what makes the SEALs America’s deadliest warriors.

This is a narrative history; stories based on either direct experiences or exhaustive research. Mann and Burton take the reader through the inception of the Naval Combat Demolition Teams (NCDU) and Underwater Demolition Teams (UDT) during World War II, their testing and development in Korea and into the Vietnam War, where the SEALs truly laid the groundwork for their legendary status, and on into the present day. The authors highlight the major steps and operations along the way, discuss the training and what it takes, and explore some of the most important moments in SEAL history.

Don Mann: Don Mann’s impressive military resume includes being a decorated combat veteran; corpsman; SEAL special operations technician; jungle survival, desert survival, and arctic survival instructor; small arms weapons, foreign weapons, armed and unarmed defense tactics, and advanced hand-to-hand combat instructor; and Survival, Evade, Resistance, and Escape instructor, in addition to other credentials. He lives in Williamsburg, Virginia.Don Mann, a bestselling author and accomplished endurance athlete and mountaineer, played a crucial role in some of America’s most daring military missions for more than two decades. A former member of Navy SEAL Team Six who was twice captured by enemy forces, he now focuses his attention on inspiring others to achieve goals they never thought they could. As a sought-after motivational speaker and trainer, Mann addresses a wide range of audiences around the country—from major corporations to universities to professional sports teams—with a message that is equal parts inspiration and strategy. Mann’s other books include Inside Seal Team Six, The Modern Day Gunslinger, The U.S. Navy SEAL Survival Handbook, and the Thomas Crocker thrillers. He lives in Virginia Beach, Virginia.

Lance Burton is a 1996 graduate of the United States Naval Academy, former surface warfare officer, class leader of BUD/S Class 239, former Blackwater security specialist, and former FBI counter-terrorism agent with over twenty years of combined service including multiple Middle East deployments in support of anti-terrorism Operations abroad. He is also a lifelong practitioner of martial arts, a professional level athlete, and author of the popular military sci-fi novel The Blood of a God. He lives in Dallas, Texas.