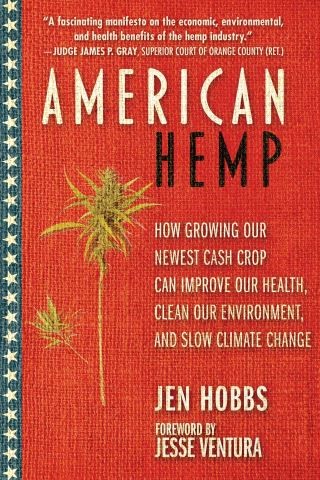 How Growing Our Newest Cash Crop Can Improve Our Health, Clean Our Environment, and Slow Climate Change

If there ever was a time to build an American hemp industry, the time is now.
In Jesse Ventura’s Marijuana Manifesto, former Minnesota Governor teamed up with Jen Hobbs to explain why it’s time to fully legalize cannabis and end the War on Drugs. Through their research, it became clear that hemp needed its own manifesto. Jen Hobbs takes up this torch in American Hemp.

December of 2018 marked a largely unprecedented victory for cannabis. The 2018 Farm Bill passed and with it hemp became legal. What the federal government listed for decades as a schedule 1 narcotic was finally classified as an agricultural crop, giving great promise to the rise of a new American hemp industry.

Filled with catchall research, American Hemp examines what this new domestic crop can be used for, what makes it a superior product, and what made it illegal in the first place; the book also delves into the many health and medical benefits of the plant. Hobbs weighs in on how hemp can improve existing industries, from farming to energy to 3D printing, plus how it can make a serious impact on climate change by removing toxins from the soil and by decreasing our dependence on plastics and fossil fuels.

American Hemp lays out where we are as a nation on expanding this entirely new (yet ancient) domestic industry while optimistically reasoning that by sowing hemp, we can grow a better future and save the planet in the process.

Jen Hobbs: Jen Hobbs has been a publicity consultant for the greater part of her career, representing Oscar and Emmy award-winning clients as well as politicians and authors. She has worked behind-the-scenes with Jesse Ventura since 2007 and shares his enthusiasm for searching for the truth, no matter where it leads. In 2016, she co-authored Jesse Ventura’s Marijuana Manifesto, which inspired the content for this book. After visiting and living in several states and countries, Hobbs now resides in O’Fallon, Missouri with her husband, Andrew, and daughter, McKayla, and currently employs her artistic talents through her art and custom jewelry company Hobbs Superior Handmade Supply.Jesse Ventura is the former independent governor of Minnesota. He is also a former US Navy frogman, a professional wrestler, a movie actor, a visiting fellow at Harvard Kennedy School of Government, and the New York Times bestselling author of seven books, including American Conspiracies, 63 Documents the Government Doesn’t Want You to Read, and Don’t Start the Revolution Without Me! He was the host and executive producer of truTV’s Conspiracy Theory with Jesse Ventura, which won the Stony Award from High Times magazine in 2010. He was also the host of the political talk show Off The Grid, which aired on RT America and online at Ora.tv. He has a reputation as a rebel and a freethinker, and he has no qualms about questioning authority. He spends half the year in Baja, Mexico and the other half in his home state of Minnesota.