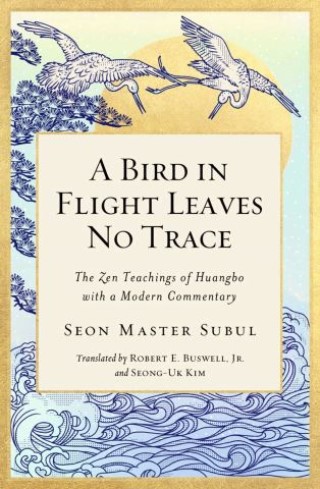 A Bird in Flight Leaves No Trace

The Zen Teaching of Huangbo with a Modern Commentary

Penetrate the nature of mind with this contemporary Korean take on a classic of Zen literature.

The message of the Tang-dynasty Zen text in this volume seems simple: to gain enlightenment, stop thinking there is something you need to practice. For the Chinese master Huangbo Xiyun (d. 850), the mind is enlightenment itself if we can only let go of our normal way of thinking.

The celebrated translation of this work by John Blofeld, The Zen Teaching of Huang Po, introduced countless readers to Zen over the last sixty years. Huangbo’s work is also a favorite of contemporary Zen (Korean: Seon) Master Subul, who has revolutionized the strict monastic practice of koans and adapted it for lay meditators in Korea and around the world to make swift progress in intense but informal retreats. Devoting themselves to enigmatic questions with their whole bodies, retreatants are frustrated in their search for answers and arrive thereby at a breakthrough experience of their own buddha nature.

A Bird in Flight Leaves No Trace is a bracing call for the practitioner to let go and thinking and unlock the buddha within.

Seon Master Subul: Seon Master Subul Sunim (b. 1953) is an influential monk in Korean Buddhism’s Jogye Order, the largest Buddhist tradition in Korea. He was first ordained in 1975. He founded the organization Anguk Seonwon in Busan in 1989 and opened a branch in Seoul in 1996. Over twenty-five thousand laypeople have taken part in more than 300 retreats with Master Subul in Korea and around the world. Recently, Subul Sunim has served as the abbot of Beomeosa Monastery and as the Seon master at the International Meditation Center at Dongguk University.

Robert E. Buswell, Jr. (b. 1953), is Distinguished Professor of Buddhist Studies at the University of California, Los Angeles, where he holds the Irving and Jean Stone Endowed Chair in Humanities.