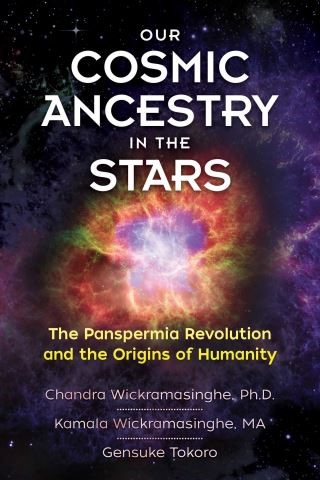 Our Cosmic Ancestry in the Stars

The Panspermia Revolution and the Origins of Humanity

An exploration of how acceptance of panspermia will soon change history

• Explores the major philosophical, psychological, cultural, religious, and environmental ramifications of the acceptance of this new scientific worldview

Mainstream consensus is that life arose on Earth spontaneously out of “primordial soup.” Yet this theory, as well as the Darwinian “survival of the fittest” concept as it relates to major steps in evolution, has no scientific basis or proof. Where, then, did life come from? As the authors show, with conclusive scientific evidence, life came from space--a concept known as “panspermia.” We humans, and all other life on Earth, evolved over millennia in response to viruses that arrived via comets, and we continue to do so.

Exploring the philosophical, psychological, cultural, and environmental ramifications of the acceptance of panspermia, the authors show how the shift will be on par with the Copernican Revolution--when it was finally accepted that the Earth was not the center of the Universe. Explaining the origins of the panspermia theory in the work of the late Sir Fred Hoyle, the authors reveal the vast body of evidence that has accumulated over the past 4 decades in favor of the cosmic origins of life, including viral inserts found in DNA that have shaped our human genome over millions of years. They show how the tiniest of viruses, microscopic animals (tardigrades), and even seeds have been found to be natural cosmonauts. The authors also show how space-borne viruses play a crucial role in the positive evolution of life and that our entire existence on this planet is contingent on the continuing ingress of cosmic viruses.

Revealing how panspermia offers answers to some of humanity’s longstanding questions about the origins of life, the authors discuss the impact this shift in understanding will have on our relationship with the Earth and on culture, history, and religion. And perhaps the most dramatic ramification of all is that acceptance of panspermia means acceptance that Earth is not unique--that other life-filled planets exist and intelligent life is common in the Universe. Not only did we come from space, but we are not alone.