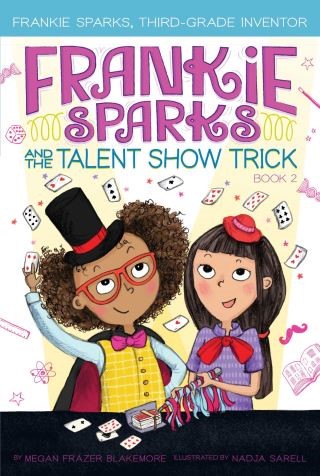 It’s time for the annual school talent show, and Frankie is excited to audition with her magic act! She wants to be just like her idol, Adelaide Herrmann, Queen of Magic. But on the day of the audition, Frankie’s best friend and Magician’s Assistant, Maya, gets a big, scary case of stage fright! How can Maya be Frankie’s helper on stage if she can’t bring herself to speak in front of their audience? It’s up to Frankie Sparks to invent just the perfect thing to help her best friend cope with the spotlight!

Megan Frazer Blakemore: Megan Frazer Blakemore is an author for children and young adults. Her middle grade novels include The Firefly Code, The Daybreak Bond, The Friendship Riddle, The Spy Catchers of Maple Hill, and The Water Castle, the latter of which was named a Kirkus Reviews Best Children’s Book of 2013, a Bank Street College Best Book 2014, a Junior Library Guild Selection, and has been included on numerous state lists. Her books for young adults are Good and Gone, Secrets of Truth & Beauty, and Very in Pieces, which was a Junior Library Guild selection. A school librarian, Megan has a BA from Columbia University, and an MLS from Simmons Graduate School of Library and Information Science. Megan is currently pursuing her doctorate in library science. She lives in Maine with her husband, two children, two cats, a leopard gecko, and (sometimes) a hive of bees.Nadja Sarell is an illustrator living in Helsinki, Finland. She graduated with MA in dance from Theatre Academy Helsinki and graduated from North Wales School of Art and Design with BA in illustration for children’s publishing in 2004. Since then she has worked as a freelance illustrator in Finland and abroad. She loves to teach art, illustration, and dance for both children and adults.