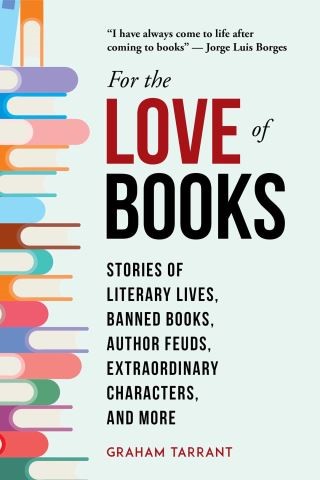 For the Love of Books

A light-hearted book about books and the people who write them for all lovers of literature.
Do you know:

A treasure trove of compelling facts, riveting anecdotes, and extraordinary characters, For the Love of Books is a book about books—and the inside stories about the people who write them. Learn how books evolved, what lies behind some of the greatest tales ever told, and who’s really who in the world of fiction.
From banned books to famous feuding authors, from literary felons to rejected masterpieces, from tips for aspiring writers to stand-out book lists for readers to catch up on, For the Love of Books is a celebration of the written word and an absolute page-turner for any book lover.
Read all about it!

Graham Tarrant: Graham Tarrant is a former publisher and the author of more than thirty books, on subjects ranging from cinema to cricket. He is also the editor of several anthologies. He lives in a Wiltshire village near Bath in Great Britain.