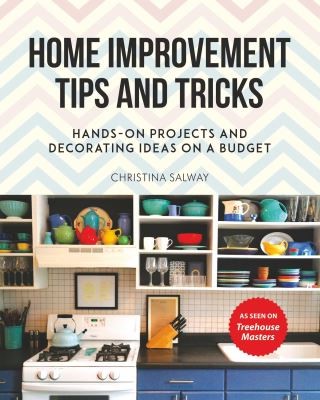 Hands-on Projects and Decorating Ideas on a Budget

Step-by-Step Projects from a Successful and Sassy Interior Designer!

Searching for a house or apartment is difficult enough on its own; transforming it into your home is an entirely different story. Home Improvement Tips and Tricks aims to give you the knowhow to decorate while staying within your budget, all presented in an engaging and approachable way. Each project is accompanied by a list of tools and materials needed, along with step-by-step instructions.

Salway’s wit and playful personality shine through as she shares her tried-and-true advice to describe the journey of renovating and redecorating not only her two-bedroom Williamsburg apartment but also the upstate New York farmhouse bought as a major fixer-upper.

Some of Christina’s greatest lessons include:

Christina Salway: Christina Salway has owned an interior design firm in Williamsburg, Brooklyn, since 2006. In addition to running her company, she’s also the on-camera and behind-the-scenes interior designer for the television show Treehouse Masters, and her work has been featured on numerous occasions in the New York Times, Country Living, GQ, the Boston Globe, Better Homes & Gardens, and New York Magazine. Her other television work includes NBC’s American Dream Builders and The Nate Berkus Show. Salway graduated from Hampshire College in Amherst, Massachusetts, in 2003 with a degree focused in Architecture. She currently lives in Williamsburg, Brooklyn, with her husband John, their son Jules, and their rescue pit bull.