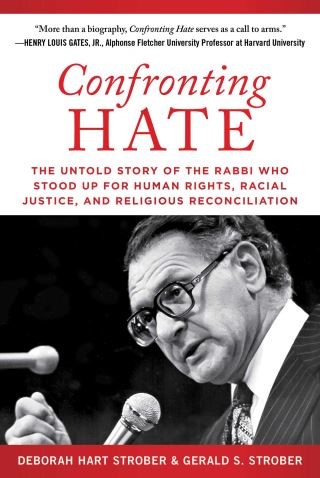 The Untold Story of the Rabbi Who Stood Up for Human Rights, Racial Justice, and Religious Reconciliation

In this biography, Gerald and Deborah Strober draw from original source materials and numerous interviews to detail the life and career of the esteemed Rabbi Marc Tanenbaum, a seminal 20th century figure in interfaith relations in the US and around the world. From his position as Director of Interreligious Affairs at the American Jewish Committee, Rabbi Tanenbaum was deeply involved in the historic Vatican II Council, which promulgated a landmark encyclical on Catholic-Jewish relations. Rabbi Tanenbaum also was one of the few Jewish leaders who worked closely with Reverend Billy Graham and other evangelicals. He worked tirelessly as a civil rights activist and was active in the cause of Soviet Jewry, as well.

Confronting Hate details this esteemed career and his interactions with the likes of television legends Norman Lear, Don Hewitt, and Franco Zeffirelli; Jesse Jackson; Martin Luther King, Jr.; and several US presidents, from Dwight D. Eisenhower to George H.W. Bush. This book leaves no stone unturned in covering the public and private aspects of the life of “the human rights rabbi.” The authors bring to light the immense international influence that Rabbi Tanenbaum has even today, more than twenty-five years after his passing.

Deborah Hart Strober: Deborah Hart Strober is a professional writer who served as a cultural columnist and general assignment reporter with the New York Jewish Week. She is the coauthor with her husband Gerald Strober of eleven published books.Gerald S. Strober is the author of American Jews: Community in Crisis and the coauthor of twelve nonfiction books. Strober has an M.A. in Jewish Studies from New York University and served on the national staff of the American Jewish Committee.