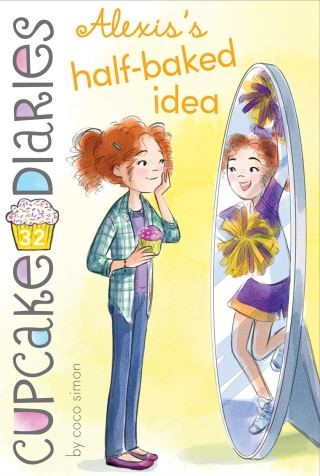 Alexis gets a taste of sibling rivalry in the latest addition to the Cupcake Diaries series.

After Alexis receives a stack of “practical” birthday gifts, she decides it’s time to change her image. She wants to be more like her carefree, popular older sister, Dylan. So, she tries out for cheerleading, without really thinking about what that entails. Not only that, Dylan was a star on her cheerleading squad, so all Alexis hears is “Dylan, Dylan, Dylan!” It’s time for Alexis to stop comparing herself to her sister and find her own special talent.

Coco Simon: From cupcakes to ice cream and donuts! Having written over thirty books about middle school girls and cupcakes and ice cream, Coco Simon decided it was time for a change; so she’s switched her focus to her third favorite sweet treat: donuts! When she’s not daydreaming about yummy snacks, Coco edits children’s books and has written close to one hundred books for children, tweens, and young adults, which is a lot less than the number of cupcakes, ice cream cones, and donuts she’s eaten. She is the author of the Cupcake Diaries, the Sprinkle Sundays, and the Donut Dreams series. Tracy Bishop has loved drawing since she was a little girl in Japan. She spends her time illustrating books, reading, and collecting pens. She lives with her husband, son, and hairy dog, named Harry, in San Jose, California.