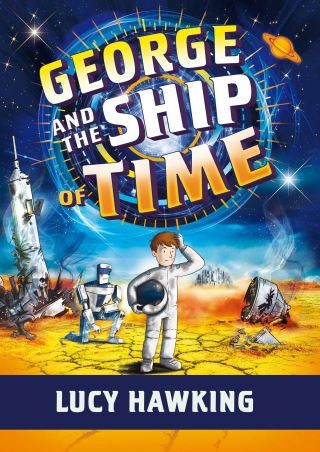 George and the Ship of Time

George travels to the future in the epic conclusion of the George’s Secret Key series from Lucy Hawking.

When George finds a way to escape the spacecraft Artemis, where he has been trapped, he is overjoyed.

But something is wrong. There’s a barren wasteland where his hometown used to be, intelligent robots roam the streets, and no one will talk to George about the Earth that he used to know. With the help of an unexpected new friend, can George find out what—or who—is behind this terrible new world, before it’s too late?

Lucy Hawking: Lucy Hawking, Stephen Hawking’s daughter, is a journalist and novelist. She is the coauthor of the George’s Secret Key series for kids, as well as the author of the adult novels Jaded and Run for Your Life. She lives in Cambridge with her son.Garry Parsons is the award-winning illustrator of many books, including George’s Secret Key to the Universe, George’s Cosmic Treasure Hunt, George and the Big Bang, George and the Unbreakable Code, and George and the Blue Moon by Lucy and Stephen Hawking; Billy’s Bucket by Kes Gray; and What’s Cool About School by Kate Agnew. He lives in London. Visit him at GarryParsons.co.uk.