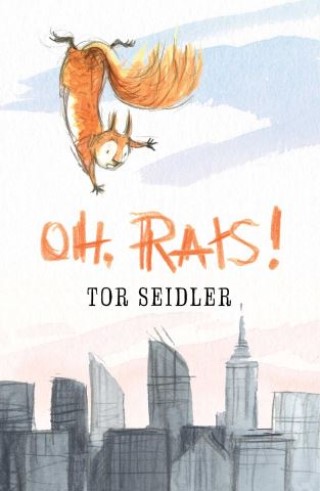 When a hawk snatches up an adventurous squirrel named Phoenix, he’s ready to kiss his tail goodbye. But what should have been a death sentence becomes the beginning of a sweeping big-city adventure in this captivating novel by National Book Award­–nominated author Tor Seidler.

Phoenix is a pretty big deal in his neck of the woods: The biggest in his litter with the most lustrous fur and by far the bushiest tail, he’s one of the most sought-after squirrels in New Jersey—which makes his kidnapping by hawk even more dramatic.

Luckily, the hawk doesn’t have the best grip. Unluckily, he drops Phoenix on a freshly-tarred street in downtown Manhattan. Now stripped of his gorgeous golden-brown coat, Phoenix looks like nothing more than a common sewer rat. Fortunately for Phoenix, it’s not a pack of sewer rats that find him (they’re a notoriously surly bunch), but rather wharf rats.

Taken in by siblings Lucy and Beckett, Phoenix is welcomed into a rat pack living in abandoned piers on the Hudson. But when they learn of plans to demolish the piers, Phoenix is swept up in a truly electrifying scheme to stop the humans from destroying his new friends’ home.

Tor Seidler: Tor Seidler is the critically acclaimed and bestselling author of more than a dozen children’s books, including Firstborn, The Wainscott Weasel, A Rat’s Tale, The Steadfast Tin Soldier, Gully’s Travels, and most notably Mean Margaret, which was a National Book Award Finalist. He lives in New York, New York.Gabriel Evans is a children’s book illustrator and author from Western Australia. He grew up wanting to be a train driver (for the hat), a circus master (for the moustache), or a children’s book illustrator (to read picture books all day). He has since illustrated many books, two of which were Notable Books for the Children’s Book Council of Australia’s Book of the Year. Gabriel runs workshops and talks in schools and libraries around Australia. Learn more at GabrielEvansArtist.com.