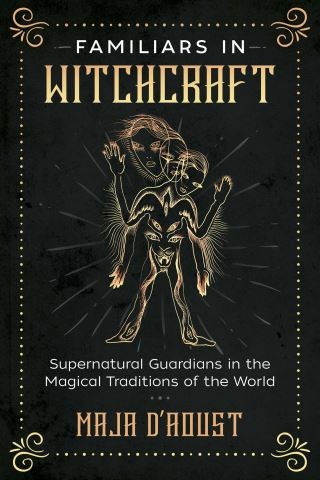 Supernatural Guardians in the Magical Traditions of the World

A comprehensive exploration of familiars and their many forms and powers

• Explores witch’s familiars in folklore, shamanic, and magical traditions around the world, including Africa, India, Scandinavia, ancient Greece, and China

• Examines the familiar in alchemical, Hermetic, and Egyptian magical literature, including instructions for procuring a supernatural assistant

Exploring the history and creation of a “witch’s familiar,” also known as a spirit double or guardian spirit, Maja D’Aoust shows how there is much more to these supernatural servant spirits and guardians than meets the eye. She reveals how witches are not the only ones to lay claim to this magician’s “assistant” and examines how the many forms of witch’s familiars are well known in folklore throughout Europe and America as well as in shamanic and magical traditions around the world, including Africa, India, and China.

The author explains how familiars are connected with shapeshifting and how the classic familiars of medieval witchcraft tradition are related to the power animals and allies of shamanic practices worldwide, including animal guardian spirits of Native American traditions and the daimons of the ancient Greeks and Romans. She examines the fetch spirit, also known as the fylgia in Scandinavian tradition, and how the witch or sorcerer draws on their personal sexual energy to give this creature its power to magnetize and attract what it was sent to retrieve. She looks at incubus, succubus, doubles, doppelgangers, and soul mates, showing how familiars can also adopt human forms and sometimes form romantic or erotic attachments with the witch or shaman.

Reviewing alchemical, Hermetic, and Egyptian magical literature, including the nearly forgotten alchemical works of Anna Kingsford, D’Aoust explores their instructions for procuring the attention of a supernatural assistant as well as an extensive description of the alchemical wedding and how this ritual joins the magician and familiar spirit into a single unified consciousness. Exploring fairy familiars, she reveals how a practitioner can establish a “marriage” with a totemic plant or tree spirit, who, in return, would offer teachings about its medicinal and visionary powers.

Delving deeply into the intimate relations of humanity with the spirit world, D’Aoust shows how forming connections with living forces other than human enables us to move beyond the ego, expand our magical abilities, as well as evolve our conscious awareness.

Maja D’Aoust: Maja D’Aoust, known as the Witch of the Dawn, is a practicing Witch and scholar of alchemy and occult lore. After completing her bachelor’s degree in biochemistry, she studied Oriental medicine and acupuncture and later earned her master’s degree in transformational psychology with a focus on shamanism, the I Ching, and ancestors. She is the author of A Witch’s Bestiary: Visions of Supernatural Creatures, co-author of The Secret Source, and creator of a Tarot deck, The White Witch Tarot. She lives in Los Angeles.