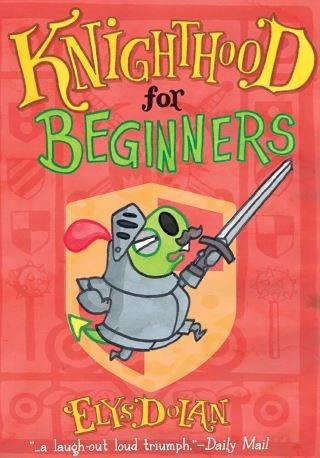 Meet Dave (a dragon who wants to become a knight) and his trusty steed (a German-speaking, worldly goat named Albrecht) in this illustrated, laugh-out-loud chapter book.

Dave is terrible at all the things dragons are supposed to be good at: hoarding gold, eating villages, telling riddles...and don’t even ask about his knitting skills. So when he becomes the first dragon ever to fail the Dragon Test, he finds a book called Knighthood for Beginners and decides he’s found his destiny! Before long, Dave is decked out in a new suit of armor and is off on a series of adventures with his trusty steed—a German-speaking, life coach, explorer, and goat named Albrecht. The ultimate goal? Dave the dragon being knighted by the King of Castletown.

From start to satisfying finish, this page-turner by Elys Dolan is a fresh and extremely funny new voice in chapter books. Black-and-white illustrations by the author help bring all the hilarity to life, and there’s even a glossary of Albrecht’s German expressions.

Elys Dolan: Elys Dolan is an author and illustrator currently living and working in Cambridge, England. She works predominantly with ink, newfangled digital witchcraft, and colored pencils, of which she is the proud owner of 178 but can never seem to find a sharpener. When not drawing pictures and making things up, Elys enjoys growing cacti, collecting pocket watches, and eating excessive amounts of fondant fancies. Knighthood for Beginners is Elys Dolan’s first young fiction book. Her hilarious picture books have been shortlisted for The Roald Dahl Funny Prize, Waterstones Children’s Book Prize, and nominated for the Kate Greenaway Medal.