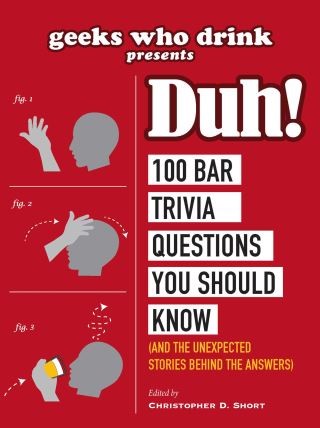 100 hilarious essays, based on blindingly obvious questions, from the creators of Geeks Who Drink—led by six-time Jeopardy! champion, Christopher D. Short.

The best trivia questions are usually the ones that are right on the tip of your tongue—so obvious that you may not know the answer offhand, but you should.

In Duh, America’s foremost masters of pub quiz, Geeks Who Drink, will take trivia lovers on a voyage through 100 of our face-palmiest questions. Along the way, we’ll explore the blind hills and corners that make random knowledge so much fun. In hilarious, informative, bite-size essays, we’ll explore such not-really-mysteries as:

-How many stars are on the Texas state flag?
-Odlaw is the nemesis of what kid book character?
-What’s the last word in the King James Bible?

Even if you already know the “what”—and you might not!—we’ll fill in the “why.” And the when, where, and how. By the end you may feel dumber, but you’ll be smarter. We almost guarantee it!

Christopher D. Short: As chief editor of Geeks Who Drink since 2010, Christopher D. Short has read, looked at, listened to, written, or rewritten some 200,000 distinct pieces of trivia—and those are just the ones he was paid for. In 2011, Short became the fourteenth-ever six-time champion on Jeopardy (he’s still the one who earned the least money). He lives in Crawfordsville, Indiana, with his wife, son, and a pitifully small dog.