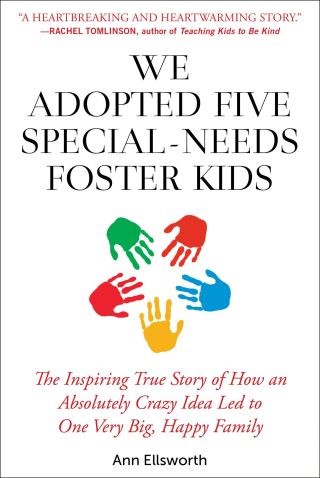 The Inspiring True Story of How an Absolutely Crazy Idea Led to One Very Big, Happy Family

A powerful memoir about the joys and pains of making a family.
In 2008, Ann and Dan made the life-altering decision to start a family. In their mid-forties and inspired by various stories that they had heard, the couple decided to adopt special needs children through foster care. Not wanting to separate siblings, Ann and Dan’s family eventually grows to seven, first with the adoption of Jimmy and Ruby, and then Jason, Susie, and Anthony.


But, the transition was not without its challenges. The children, aged five to ten years old, had been neglected, abused, and diagnosed with behavioral, cognitive, medical, and psychiatric conditions, none of which could be treated medically. Their first months in their new home were intense, overwhelming, and on occasion, violent. With numerous outbursts and incidents, Ann and Dan’s patience and resolve were constantly tested. But slowly, when surrounded with stability, warmth, compassion, and love, the children settled in and became a family.


Poignant and heartfelt, We Adopted Five Special-Needs Foster Kids is for any reader who has ever been part of a family.

Ann Ellsworth: A native of the Bay Area, Ann Ellsworth is a versatile soloist, collaborative, and recording artist. Her horn playing has been called, “outrageous” and “splendidly projected,” by the New York Times, and “meticulously planned and executed . . . as fresh and exalted as Alpine air,” by the Huffington Post. Ann Ellsworth attended the Eastman and Juilliard Schools, and currently teaches horn performance at Lawrence University faculty in Appleton, Wisconsin. We Adopted Five Special-Needs Foster Kids is her first book.