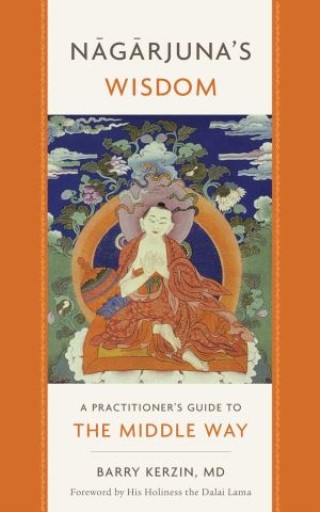 A Practitioner's Guide to the Middle Way

Explore the Mulamadhyamakakarika the way the Dalai Lama teaches it.

Nagarjuna’s Fundamental Verses on the Middle Way, or as it’s known in Tibetan, Root Wisdom, is a definitive presentation of the doctrines of emptiness and dependent arising, and a foundational text of Mahayana Buddhism.

In this book, Barry Kerzin, personal physician to the Dalai Lama, presents this fundamental work in a digestible way, using a method favored by His Holiness: focusing on five key chapters, presented in a specific order.

Thus, Dr. Kerzin walks us through Nagarjuna’s masterwork and lets the great teacher introduce us to Buddhist philosophy, step by step—deepening our understanding, enhancing the way we practice.

Barry Kerzin: Barry Kerzin is an affiliate professor at the University of Washington Tacoma, a visiting professor at Central University of Tibetan Studies in Varanasi, India, an honorary professor at the University of Hong Kong, and a former assistant professor of medicine at the University of Washington. Barry is also a fellow at the Mind and Life Institute and consults for the Max Planck Institute in Leipzig on compassion training. He is the founder and president of the Altruism in Medicine Institute and the founder and chairman of the Human Values Institute in Japan. He was ordained as a monk by the Dalai Lama, and for twenty-nine years he has been providing free medical care to everyone from the poor up to the highest lamas—including the Dalai Lama. After completing many meditation retreats, his brain was studied to assess structural and functional changes.

He has written No Fear No Death: The Transformative Power of Compassion and, in Japanese, Tibetan Buddhist Prescription for Happiness, and with the Dalai Lama and Professor Tonagawa, Mind and Matter: Dialogue between Two Nobel Laureates in Japanese.