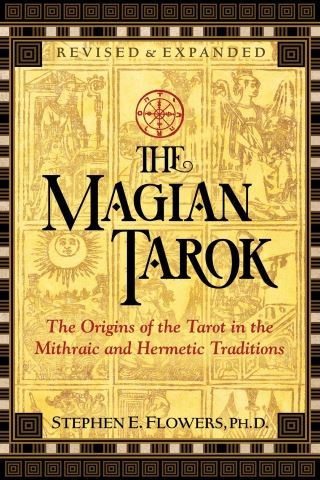 The Origins of the Tarot in the Mithraic and Hermetic Traditions

• Looks at the original meanings of the Major Arcana using Mithraic symbolism, as well as the deep-level connections of the Tarot with Egypt, the Romani people, the Semitic tradition, and runes

The Tarot is a mythic map of the world and of consciousness. It offers a meta-language of signs and symbols that communicate their meaning precisely. Yet the true origins of the Tarot remain shrouded in mystery. These oracular cards have long been thought to have come from Egypt or from the “Gypsies,” but as Stephen E. Flowers reveals, their original roots lie in the Mithraic tradition of the Persian Magi.

In this book, Flowers explores the historical roots and mythology of the symbolic images that became known as the Tarot. Drawing on theories first pioneered by the Swedish scholar Sigurd Agrell (1881-1937), he reveals the genesis of the Tarot’s symbolism in the great Hermetic tradition at the same time the Magical Papyri were being written in Greco-Roman Egypt. He explains how the sequencing of the Major Arcana is related to the images used in Mithraic initiation, elements of which were then integrated into existing Roman and Egyptian traditions. Exploring the Magian teachings on the Stoeicheia, an alphabet that acted as a map for understanding the order of the cosmos, he demonstrates how this alphabet of magical symbols was the template for the Tarot. The author also shows how the 22 Major Arcana cards were related to the 22 letters of the Roman alphabet used for oracular purposes in ancient times. Looking in-depth at the principles of Mithraism, the author explains how the Roman form of Mithraism, a guiding factor in the early shaping of the Tarot, was itself a synthesis of Iranian Magianism, Greek stoicism, Babylonian astrology, and Greco-Egyptian Hermeticism.

Exploring the cards themselves, Flowers then looks at the original meanings of the Major Arcana using Mithraic symbolism and its offshoots. He also explains the truth behind many of the myths surrounding the Tarot, including their deep-level connections with Egypt, the Romani people, the Semitic tradition, and runes. By restoring the original mysteria to the icons of the Tarot and learning their true origins, we can better understand the insight these powerful cards impart in divination.

Stephen E. Flowers: Stephen Flowers studied Germanic and Celtic philology and religious history at the University of Texas at Austin and in Goettingen, West Germany. He received his Ph.D. in 1984 in Germanic Languages and Medieval Studies with a dissertation entitled Runes and Magic.