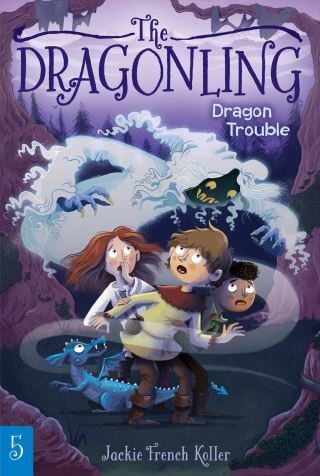 Darek must rescue Zantor and Pola from the dangerous mists of Krad in this fifth book in the fantastical Dragonling chapter book series!

When Darek’s beloved dragonling, Zantor, and Darek’s best friend, Pola, disappear into the mists of Krad, everyone assumes they’re gone for good. But Darek just knows that Zantor and Pola are alive. He can hear the dragonling’s cries for help, deep inside his own head. And much to his surprise, Rowena—the cause of all the trouble—hears them, too.

Together Darek and Rowena sneak into Krad to rescue their friends. But they soon find that Krad is even more dangerous than they’d feared. So dangerous that it may be impossible to save anyone, even themselves…

Jackie French Koller: Jackie French Koller has been a storyteller since the sixth grade, when she amused her friends by spinning tales on the playground. She has also edited a children’s newspaper, taught writing in public schools, and studied art. Ms. Koller lives in Groton, Massachusetts, with her husband.