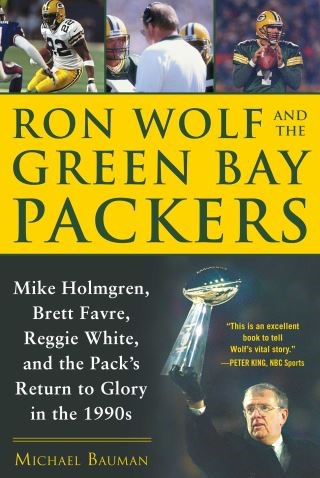 Mike Holmgren, Brett Favre, Reggie White, and the Pack's Return to Glory in the 1990s

In November 1991, Ron Wolf took over a Green Bay franchise that had been in a twenty-four-year decline since the departure of Vince Lombardi. Wolf, driven by his inherently competitive nature, and by a heart attack the previous year that left him believing that whatever he did had to be done quickly, proceeded to rebuild a team and a franchise. His work in Green Bay was characterized by a single-minded devotion to the Packers’ success, and by an ability to make personnel decisions that, while sometimes unlikely and unpopular, proved to be almost invariably successful.

With Wolf in charge, the Packers never had a losing season. They subsequently captured three straight NFC North Division titles, and went to two Super Bowls, winning Super Bowl XXXI. Wolf had set a goal of winning one hundred games in ten years with the Packers. He was victorious in 101games in nine years, including the postseason.

During his time with the Packers, Wolf brought in some major names, including:

Wolf’s impact on Packers football cannot be overstated. Even today, Wolf's legacy remains in place. Ted Thompson came through the scouting ranks under Wolf's direction. During Thompson's tenure as general manager, the Packers qualified for the playoffs in eight straight seasons and won one Super Bowl. After the 2017 season, Thompson was replaced as GM by Brian Gutekunst, another man who had been brought into the Packers' scouting operation by Wolf.
An in-depth look at one of the greatest NFL GMs of all time, Ron Wolf and the Green Bay Packers is a must-read for every football fan.

Michael Bauman: Michael Bauman is a former sports columnist for the Milwaukee Journal and theMilwaukee Journal-Sentinel, where he covered the Brewers and the Packers. Bauman also wrote for MLB.com from 2001 to 2016, when he retired. He lives with his family in Glendale, Wisconsin.